Do You Know Reggie Oliver? 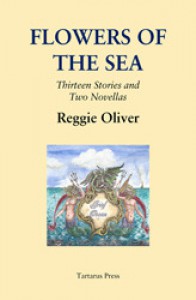 You don't, then don't come telling me you are any widely read expert on contemporary horror fiction.  Mr. Oliver doesn't come from the sexual abuse and mayhem school of horror fiction.  Instead he comes out of the literary tradition that begins with J. Sheridan Le Fanu through M.R. James and Robert Aickman to such contemporary writers as Mark Valentine, R.B. Russell, Terry Lamsley, and others.  Still you might not want to eat real heavily before tucking in to one of Mr. Oliver's stories.  It might just sneak up on you.  Expect the graceful metaphor, the archaic word or two, but don't forget to leave the light on.  Lush and evocative prose disguises some of the weirdest but oftentimes sublime stories; sometimes the old fashioned spook story, or perhaps the melancholy weird story about Alzheimer's.

Beautifully rendered frontispieces for each story give the volume a classic book feel.  The kind of book you would be in thrall of when you found it as a child.  If you have the hardcover it comes with sewn in numbers and one of those ribbon thingies in it.

You don't have any excuse for not knowing Mr. Oliver and saying you are a horror fan.  He is available in every format from the high-end collectible hardcover to the lowly e-book.  Go, buy one now.  You won't regret it.