Only Half the Story 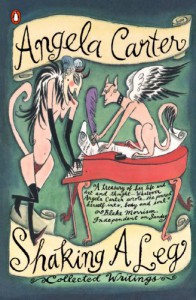 If you only know Angela Carter from her fractured fairy tales or her novels that take down the patriarchal structure that has characterized narrative fiction for centuries, then you only know half of the story.  Carter had a wonderful imagination but this imagination was fueled by her potent intellect and curiosity for everything from literature to travel.  She has to have been one of the most well read persons of the 20th century.

Shaking a Leg is the companion volume to her collected stories and covers the timeframe from the late sixties until her death in 1993.  The other half of the story I referred to is her career as a columnist, critic, and freelancer as well as the other half that was a fiction writer.  Her wit and wisdom, so different from the surrealism of her fiction comes out in all these pieces, she comments everything from cinema to art to town festivals.

Somewhat of an iconoclast, she isn't afraid to call D.H. Lawrence the "greatest English novelist of the 20th century" while taking him down as an impotent male chauvinist who didn't know a thing about women at the same time.  She is not being facetious.  Who else would deride the Booker Prize in the same year she was one of the judges?  Carter calls them as she sees 'em as I like to say. At the same time her writing always remains both serious and entertaining.

This was the perfect "bathroom book" (not that I left it in the bathroom!) for me because most of the pieces are only a few pages long; I think the longest entry might have been a dozen.  If you don't have a lot of time you can pick up one or two entries and not lose your context.  I hate reading stories and novels in fits and starts so I usually have at least one book of this kind around all the time.

There is a nice chronology to put all the pieces into context with each other (they are arranged broadly by topic).  There is a detailed index.